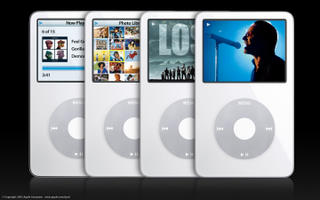 They did it. As I mentioned in my blog a few months back, it was rumored that Apple was in negotiations with record labels for music videos. The logical conclusion at that point was that Apple was coming out with a new iPod that would play video. Well they did it. Today they announced a new iPod that, you guessed it, plays videos. They increased the screen size, while actually making the iPod slimmer than previous models.

The few screenshots and videos of the product in action look promising. I was concerned that they were going to do video on the previous screen size. I felt it was too small to work, but the new screen size is somewhat bigger a looks really sharp. All in all I felt it was a pretty cool little product.

Then I kept reading….

I soon discovered that they released a new version of iTunes and have changed the iTunes music store to where it now has videos for sale on it. “Well, now that could be interesting” I muttered to myself. My first thought was that I haven’t watched music videos since long before MTV stopped showing them, but then I discovered an interesting little treat. Apparently Apple has inked a deal with ABC to sell the episodes of their TV shows on the iTunes music store. It didn’t take long before I was charging an episode of Desperate Housewives to my Apple account. How could I say no to an all you can eat Eva Longoria feast for the low, low price of $1.99.

I just finished watching the first episode of the new season that I purchased. It plays right inside of iTunes and even plays in fullscreen mode. It looked great. I am thoroughly impressed with this new direction that Apple is going. We’ll see where we go from here. I think its going to be interesting.

Did I mention Eva?

One Response to "And then there was video"