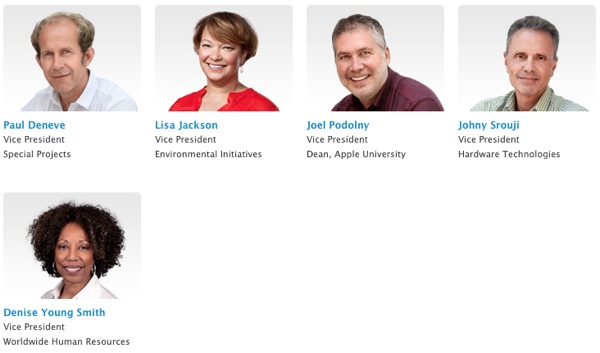 Since taking over as CEO, Tim Cook has aimed to share the spotlight with his employees, letting company leaders like Eddy Cue, Craig Federighi, and Jony Ive take part in press interviews and lead Apple events. The addition of five new VPs to the press roster suggests Cook and the team at Apple are more open than ever, recognizing the efforts of an even larger number of key employees.

Of the new executives joining the page, Paul Deneve and Lisa Jackson are relatively new hires, joining Apple in 2013. Deneve oversees special projects, while Jackson has a public-facing job overseeing Apple’s environmental efforts. Joel Podolny, dean of Apple University and Denise Young Smith, who oversees Apple’s human resources, were promoted to their roles early in 2014. The remaining VP, Johny Srouji, oversees hardware technologies, a role he has held for just over a year.

The new additions to the executive press page also spotlight two additional women who hold important leadership roles at Apple, bringing the total number of females on the page to three, with Angela Ahrendts. Apple has faced criticism for its lack of female leadership in the past, which Cook has been aiming to remedy. According to diversity numbers released earlier this week, 72 percent of Apple employees in leadership roles are male.