An artist’s concept of NASA’s Ingenuity Mars Helicopter flying through the Martian skies.

Ingenuity has soared over the Martian surface three times in the last 12 days. The 4-pound, tissue-box-sized helicopter was scheduled for a fourth flight on Thursday, but it did not get off the ground. 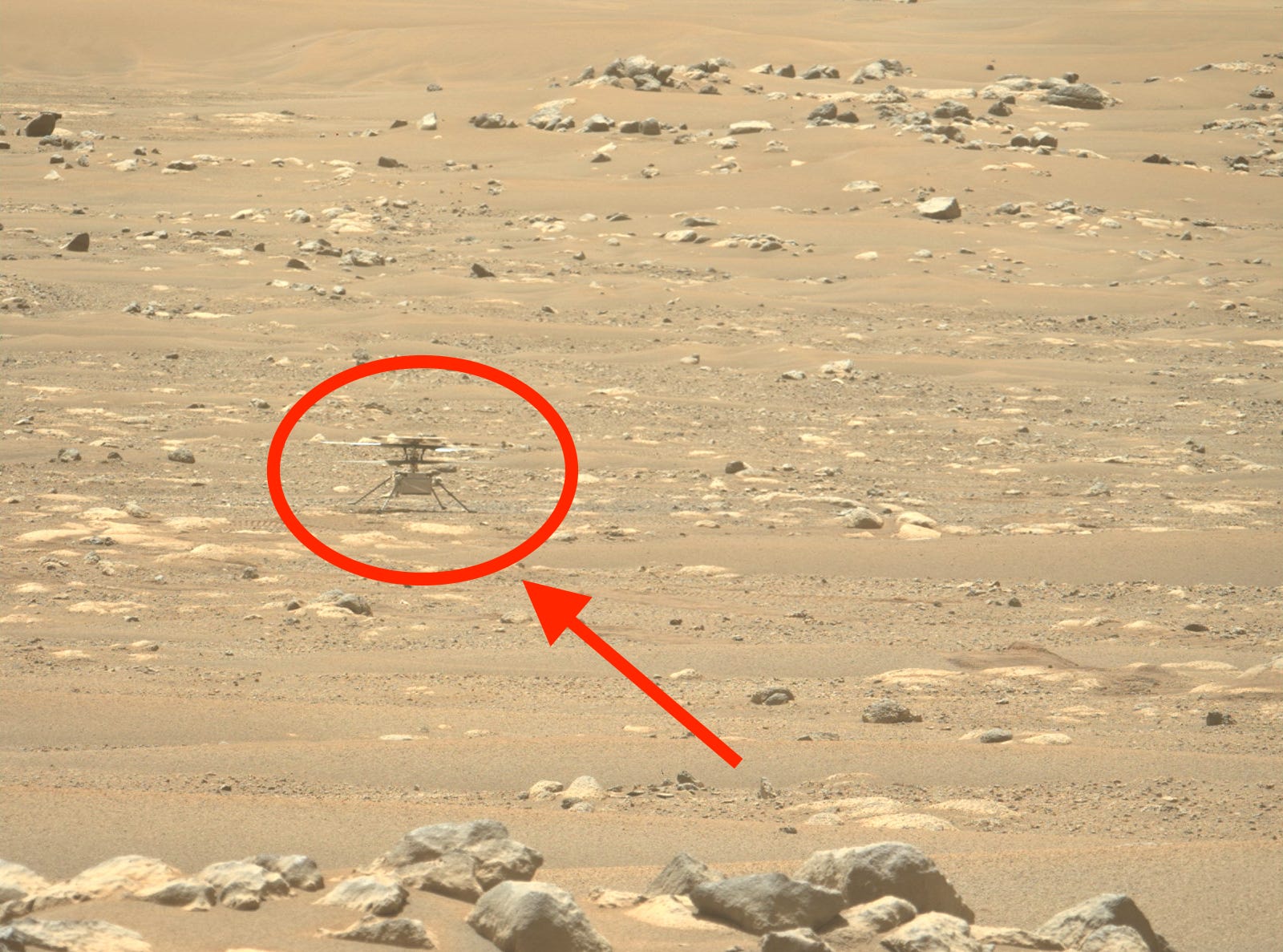 A software issue may have prevented the helicopter’s flight computer from transitioning to flight mode, so the Ingenuity team has said it will attempt the fourth flight again on Friday.

NASA scientists have planned for the rotorcraft to attempt five flights in total, but they won’t be surprised if it crashes in the process, since they’re about to push the helicopter as far and fast as it will go in these last two flights.

“We really want to push the rotorcraft flights to the limit and really learn and get information back from that,” MiMi Aung, the project manager for Ingenuity, said in a recent briefing.

Aung’s team hopes Ingenuity can work up to flying laterally across 980 feet of Martian ground.

Even if Ingenuity lands safely from both the fourth and fifth flights, that would still be the end its epic 8-month journey. 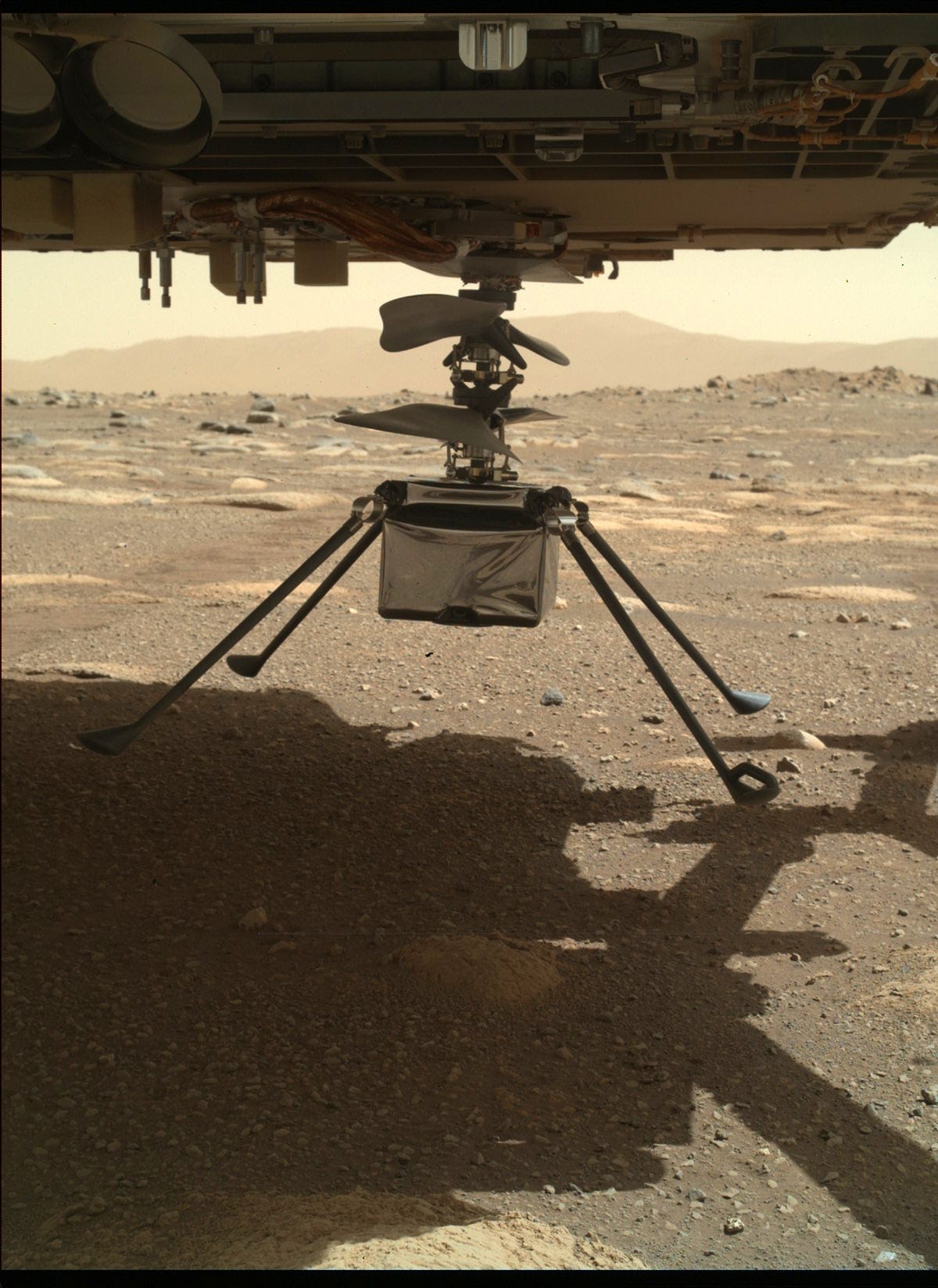 Ingenuity underneath the Perseverance rover.

That’s because only one week remains in Ingenuity’s 30-day flight window. After that, NASA’s Perseverance rover — which carried the helicopter to Mars — will continue on to its main mission: hunting for fossils of ancient alien microbes.

The two vehicles traveled 293 million miles together, landing in Mars’ Jezero Crater in February. Perseverance set Ingenuity free in early April, dropping the helicopter onto the Martian surface so that it could soak up sunlight to charge its battery.

Ingenuity started to test its carbon-fiber rotor blades on April 8. 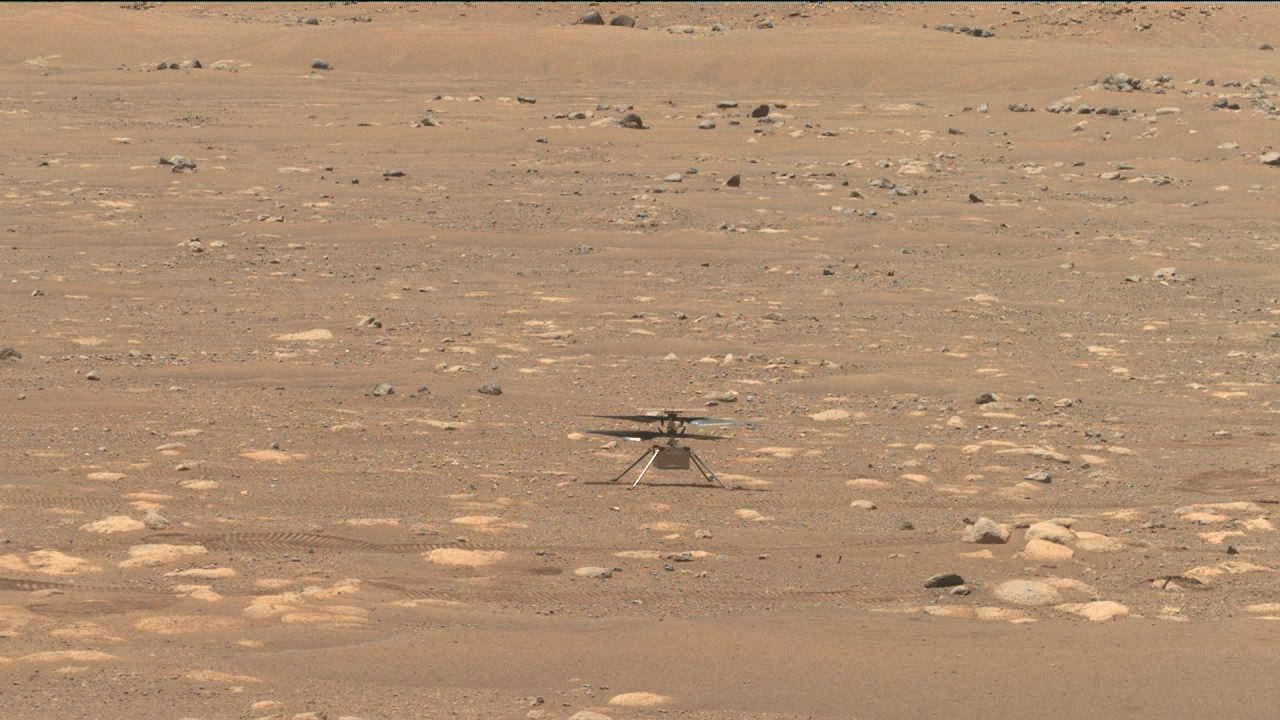 To get the helicopter off the ground in Mars’ thin atmosphere, its rotors have to spin at a blistering 2,500 revolutions per minute. That’s five times faster than the blades of a helicopter on Earth.

The issue that prevented Ingenuity’s fourth flight on Thursday might be related to a problem first found when the helicopter attempted a full-speed test of its blades on April 9, before its initial flight.

That test failed because Ingenuity’s flight computer was unable to transition from “preflight” to “flight” mode. NASA engineers resolved the issue with a software rewrite, but they determined that the fix would only successfully transition the helicopter into flight mode 85% of the time.

The data that Ingenuity beamed back on Thursday indicated that it couldn’t get into flight mode again — so it may have hit one of the 15% of instances in which the software patch doesn’t work.

After the software fix, Ingenuity made history on April 19, when it took flight for the first time. It hovered 10 feet above the Martian surface for about 30 seconds. 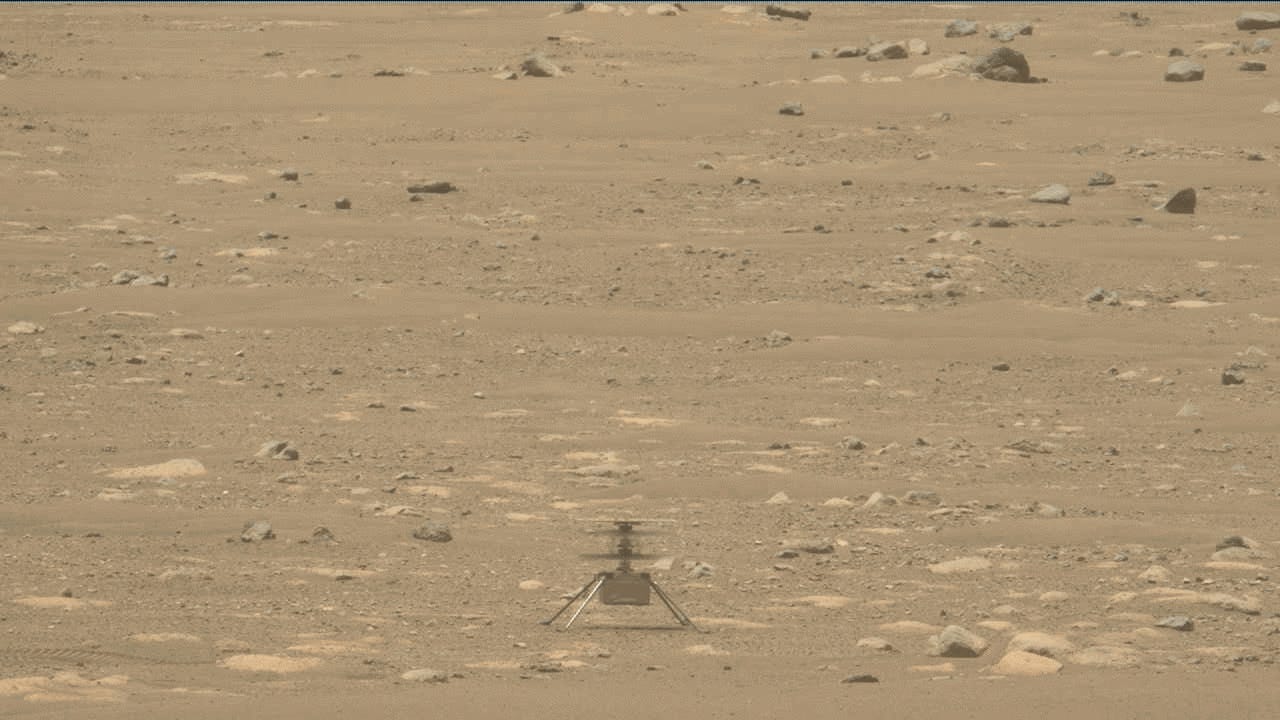 Mastcam-Z, a camera on the Perseverance rover, captured Ingenuity taking off and landing for its first flight on April 19, 2021.

Never before had a spacecraft conducted a controlled, powered flight on another planet. (Though the Soviet Union’s Vega missions did successfully fly balloons on Venus in the 1980s.)

Though 10 feet may not sound like much, hovering there is the equivalent of flying three times as high as the peak of Mount Everest, since Mars’ atmosphere has a density just 1% of that on Earth.

Ingenuity’s purpose on Mars was simply to show that rotorcraft technology could work in that kind of harsh environment. And it succeeded.

Two cameras on the bottom of Ingenuity recorded a still, black-and-white image of the Martian surface during the flight – complete with the helicopter’s shadow. 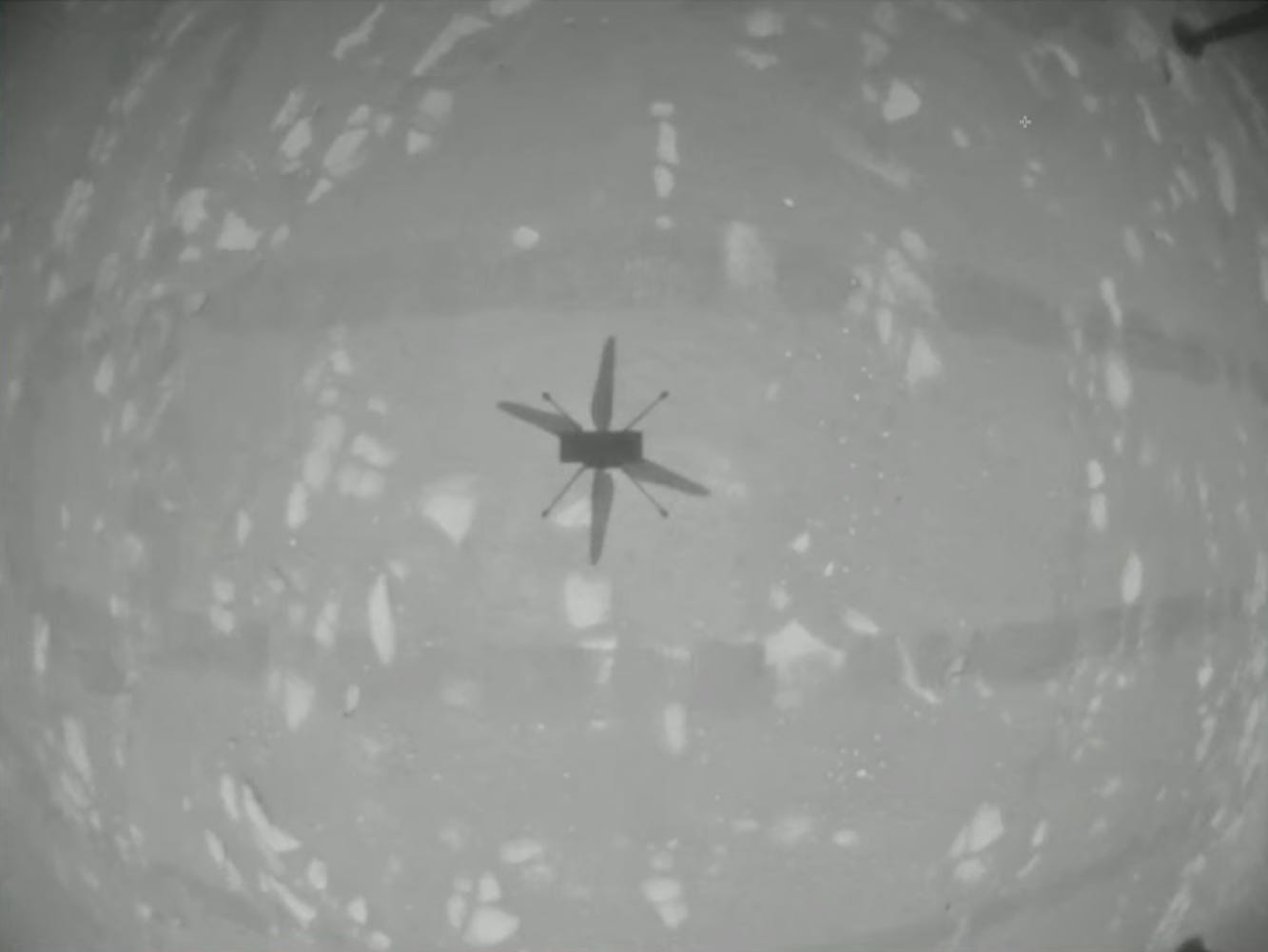 Ingenuity snapped this photo of its shadow on the ground below as it flew on Mars for the first time, April 19, 2021.

The helicopter’s chosen airfield in the Jezero crater measures 33 by 33 feet (10 by 10 meters).

A camera on the Perseverance rover captured the flight in exquisite color. 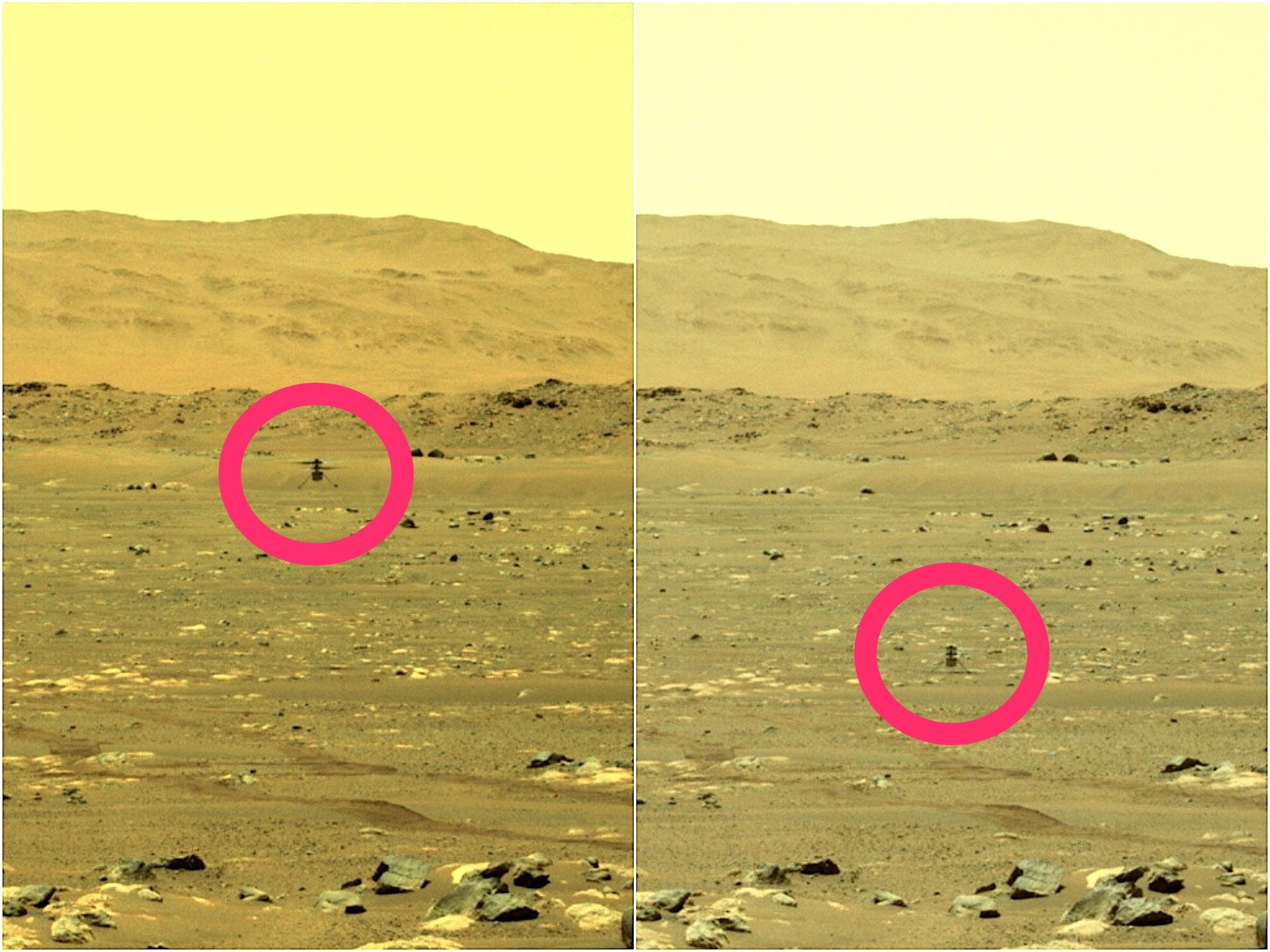 Perseverance moved to a nearby overlook to photograph and film the event.

Footage from a camera on Perseverance’s mast revealed dust plumes from Ingenuity upon takeoff and landing.

Then on April 22, Ingenuity flew even higher – 16 feet – and moved sideways for the first time. 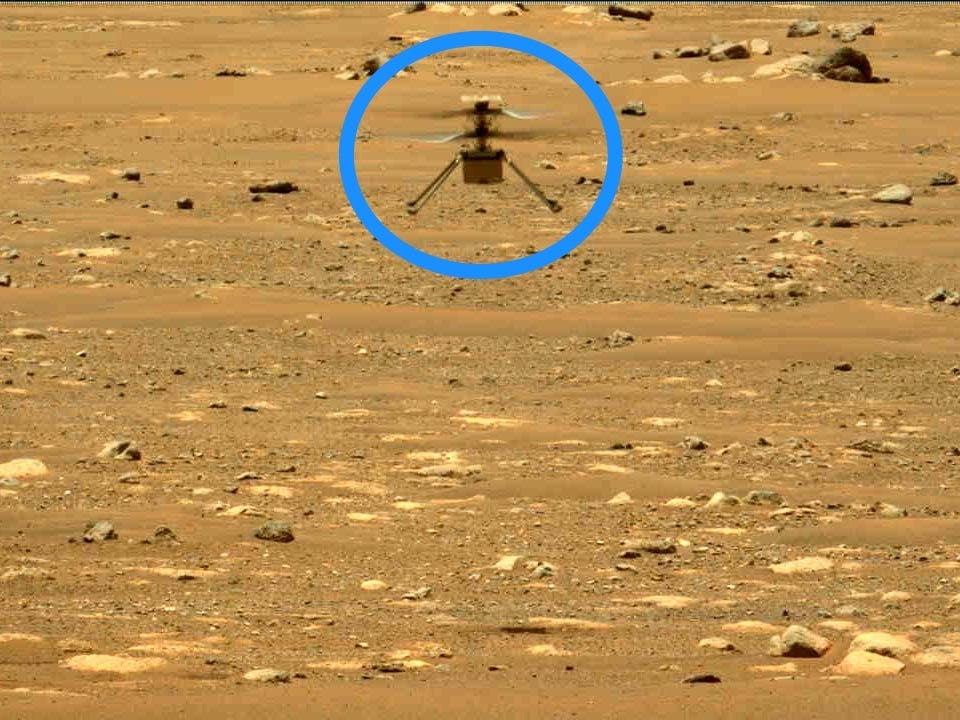 The Perseverance rover captured Ingenuity in mid-air during its second flight on April 22, 2021.

During that second flight, Ingenuity snapped its first color image of the Martian surface. 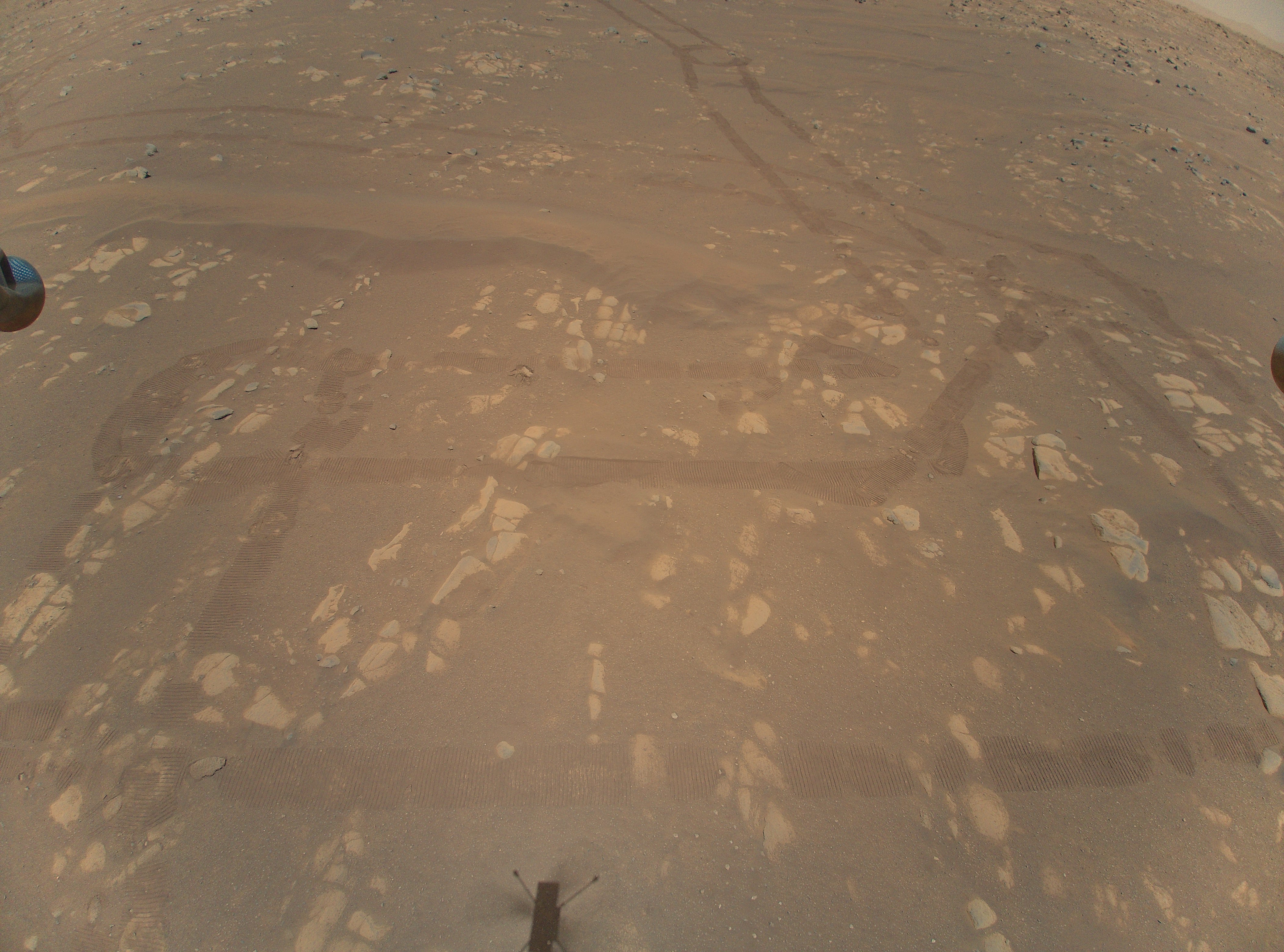 At the time it took this image — which shows tracks from the Perseverance rover on the ground below — Ingenuity was 17 feet in the air.

Ingenuity executed its third flight on Sunday, reaching an airspeed of about 4.5 miles per hour.

The helicopter traveled 50 meters (164 feet) north — more than half the length of a football field — before returning to its starting place. The flight lasted about 80 seconds.

Ingenuity’s third flight “was nothing short of amazing,” David Lavery, the project’s program executive, said. “With this flight, we are demonstrating critical capabilities that will enable the addition of an aerial dimension to future Mars missions.” 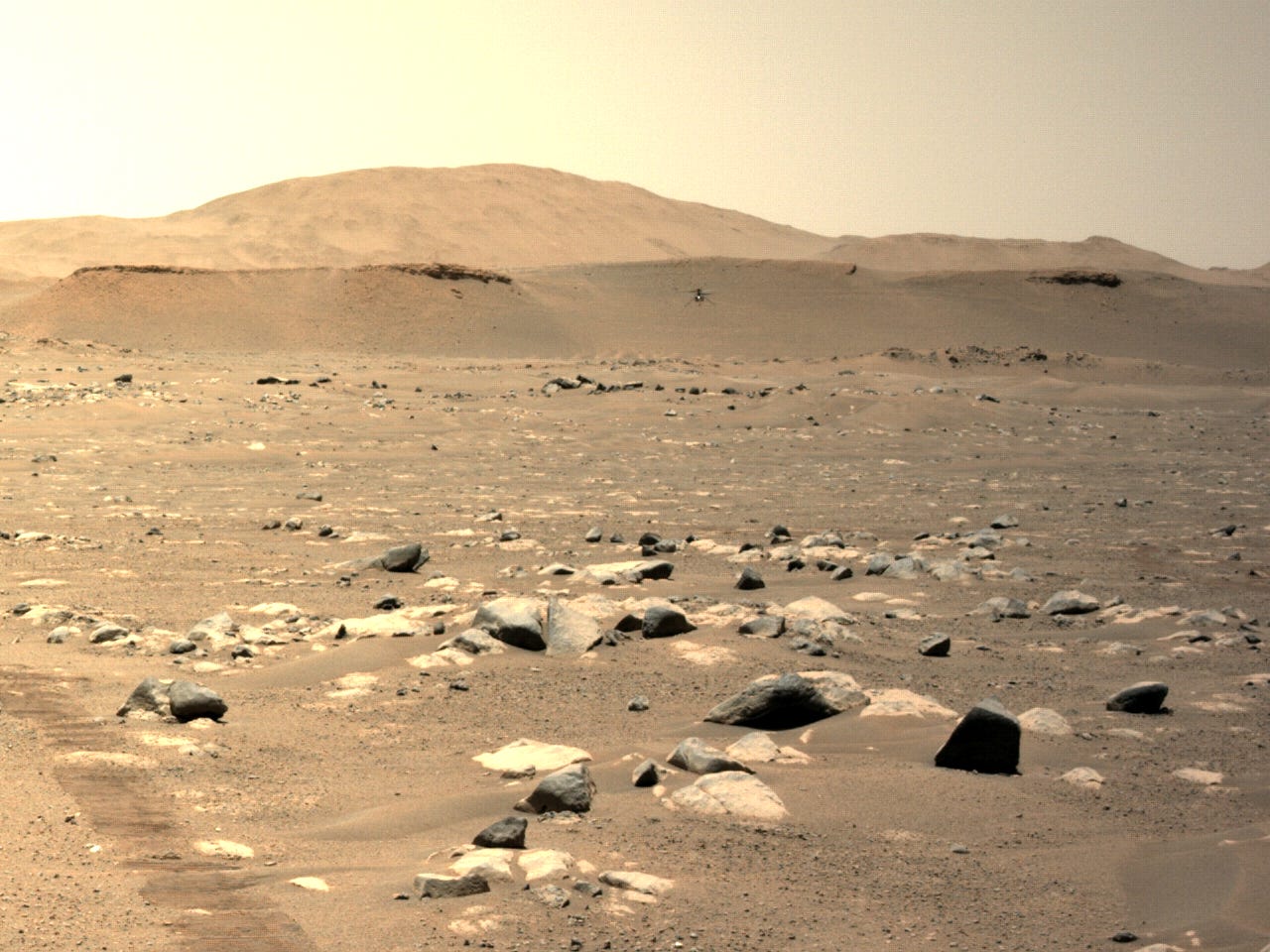 NASA’s Ingenuity Mars Helicopter can be seen hovering during its third flight on April 25, 2021.

Space helicopters like Ingenuity could someday explore treacherous terrain from above, study large regions faster than a rover can, or even do reconnaissance for astronauts.

These space drones could fly “over ravines, down canyons, up mountains,” Josh Ravich, the mechanical lead for the Ingenuity team at NASA’s Jet Propulsion Laboratory, previously told Insider. “Even rocky terrain is fairly inaccessible to the rovers but much more easily accessed by a rotorcraft.”

The helicopter even managed to spy on Perseverance from the air during its third flight. 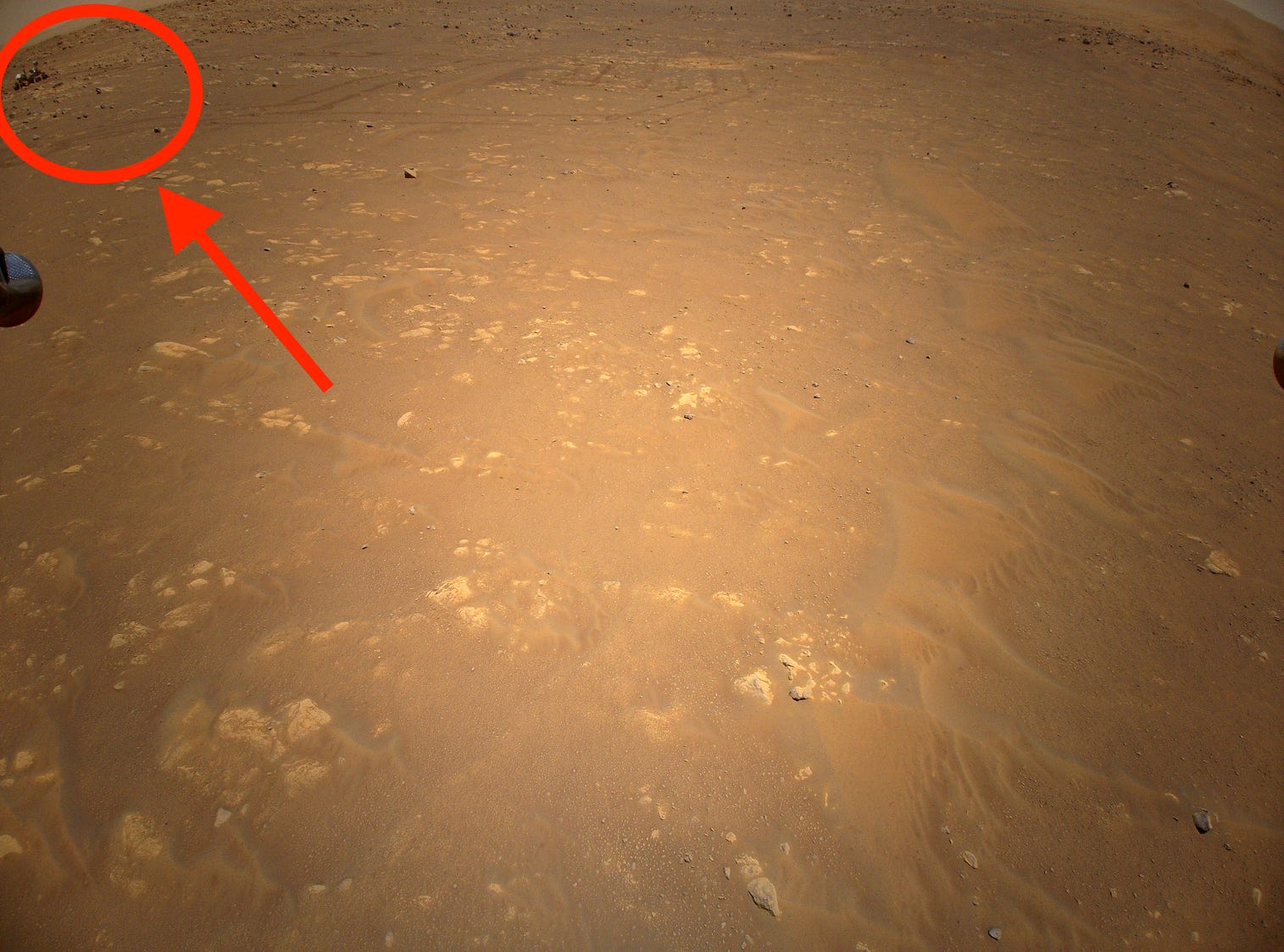 NASA’s Perseverance rover is visible in the upper left corner of this image that the Ingenuity helicopter took during its third flight on Mars, April 25, 2021.

Ingenuity was flying at an altitude of 16 feet and about 280 feet from the rover when it snapped the picture.

It’s next planned journey is even more ambitious: During the 117-second flight, the rotorcraft will attempt to reach a record speed of 3.5 meters per second (7.8 mph). 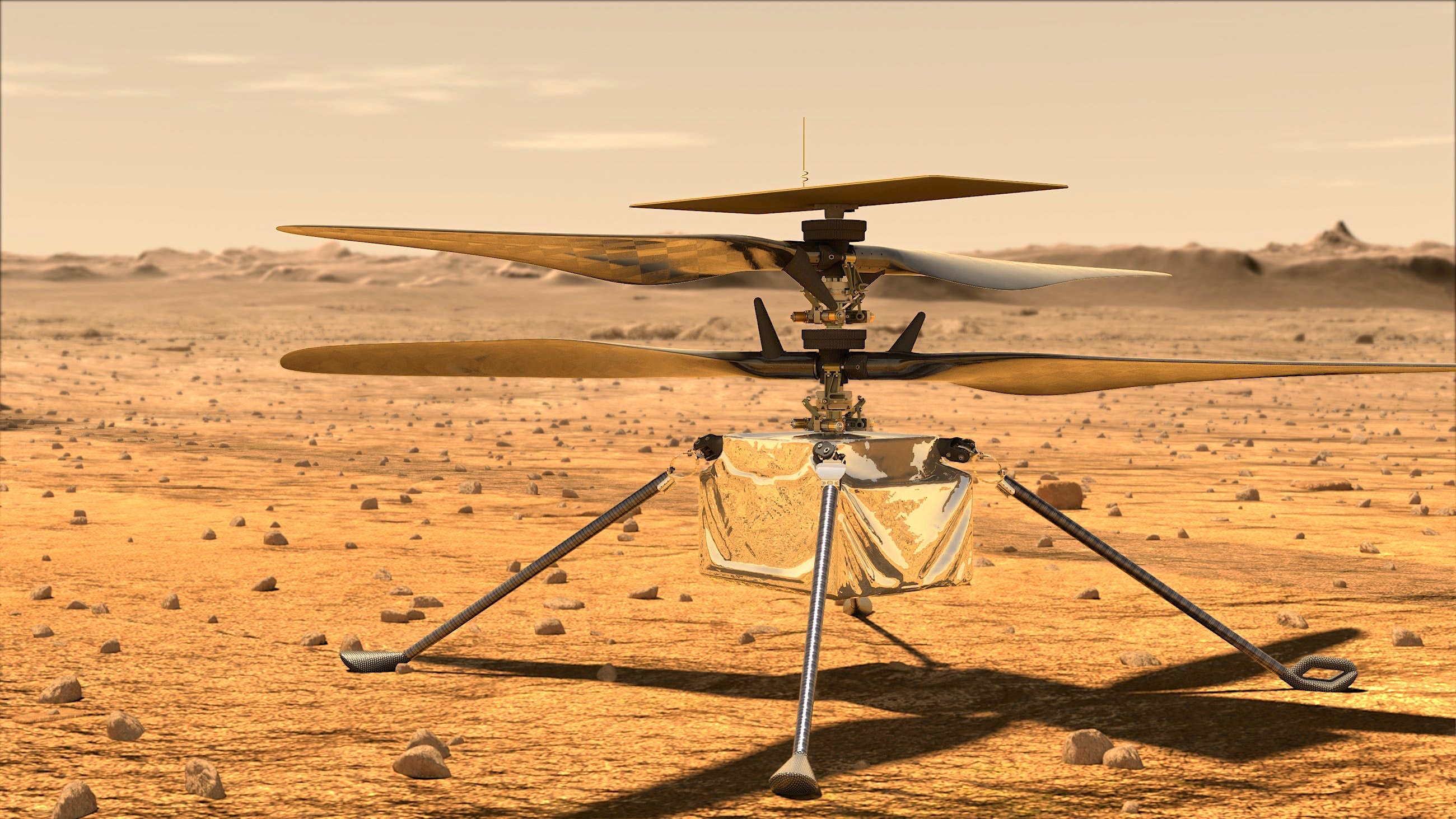 This artist’s concept shows the Ingenuity helicopter on the Martian surface.

That’s the flight that was scheduled for Thursday but postponed until Friday. NASA said the helicopter is “safe and in good health” and will reattempt its fourth flight on Friday at 10:46 a.m. ET. NASA engineers expect to receive the first data from that attempt about three hours later.

If the attempt is successful, the helicopter should climb 16 feet into the air, fly south for about 436 feet, and snap more photos of the Martian surface along the way.

Go to the Source of this article